The first step in providing a particle counter with long laser life is to start with a reliable laser. The lasers used are not designed specifically for particle counters, but instead are designed for other devices. Previously Particle Measuring Systems used lasers intended for CD drives; these lasers typically operated at wavelengths of 780 nm. However, as CD-only players became less common, so did these lasers. Be wary of buying a device currently using 780 nm lasers: there is a strong possibility that the device will be discontinued in the near future, and servicing the instrument will be expensive and difficult, if not impossible.

Most lasers currently used in our particle counters were originally designed to be used in DVD drives. These lasers typically have wavelengths in the 630-680 nm range. Particle Measuring Systems also uses high-powered lasers that operate at or near 808 nm for our high sensitivity instruments. These lasers are much more expensive than DVD lasers, often costing several thousand dollars. Both the 630-680 nm and 808 nm lasers are very reliable because they are manufactured regularly, and they are used for a number of applications that require high power.

Higher temperatures reduce laser life. Our rule of thumb is that laser life is halved for every 8ºC increase in temperature. During operation, the lasers generate heat which must be dissipated effectively or the temperature of the diode will increase and shorten its lifetime. Particle Measuring Systems carefully designs our laser systems and laser mounts to minimize laser operating temperatures. In the case of the high-powered lasers, the laser chip is mounted directly onto a thermo-electric cooler (TEC) which allows us to precisely control the temperature, thus extending laser life.

The third factor is the operating power of the laser. The higher the power used, the shorter the life of the laser and vice versa. Laser manufacturers will supply reliability data on their devices that suggests laser lifetimes of over 50,000 hours if operated at 25ºC and at its rated power. However, this data is based on accelerated life testing; our experience is that this testing provides overly optimistic estimates of lifetimes. Actual field data has taught us that operating the devices at the rated power will result in lifetimes of 5000-15,000 hours. However, by de-rating the laser and operating at less than 80% of its rated power, those lifetimes are extended dramatically. Therefore, Particle Measuring Systems operates all lasers significantly below the rated power.

The reliability plots (click here to download the full paper) show the extended lifetimes that Particle Measuring Systems’ laser expertise brings to its instruments. The vertical axis represents the percentage of lasers that have failed. The mean-time-to-failure (MTTF) is when 50% of the devices have failed. This data is based on actual field performance, not accelerated testing in a lab. The Airnet® II instruments have a demonstrated MTTF of twelve years, and the MTTF of the Lasair® III instruments is completely off the charts! The difference between the instruments is likely a result of differences in how they are used; all Airnet IIs run continuously, but some Lasair IIIs are used only intermittently. 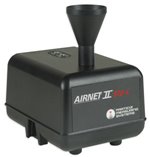 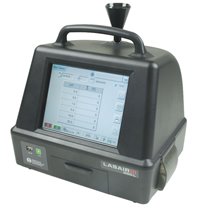 Particle Measuring Systems provides high-reliability systems that lower your overall cost of ownership and ensure your instrument is working when you need it to.