In order to count nanoparticles, the technology behind ultrapure water particle counters had to be improved. In this blog series, we look at the signal pathway of a typical counter and the areas of optimization and groundbreaking engineering.

How do liquid particle counters work?

The basic anatomy of a liquid particle counter is shown above. Let’s look at what’s happening step by step:

The intensity of the light scattered by a particle is proportional to the diameter of the particle to the sixth power (d6) when particles are smaller than the wavelength of visible light (averaging 500 nm or 0.5 µm).  The electrical signal of the photodetector becomes much smaller as the particle size decreases. For example, a 20 nm particle scatters one million times less light than a 200 nm particle. Even the difference in detection capability between 30 nm and 20 nm requires greater than 10 times the improvement in signal and noise sensitivity. In other words, detecting small particles requires some specialized tools!

When we listen to music on systems from just fifty years ago, we can perceive a difference in sound clarity. A signal, whether it’s from a light source reaching a photodetector or the hit of a tambourine entering a microphone, is always accompanied by some noise. This noise is the primary limitation of optical particle counters.

The above image shows 20 nm calibration spheres passing through an ultrapure water particle counter. The reading with the highest peak is the particle signal. To the left and right, you can see noise of a relatively fixed height. Ensuring the particle signal and the noise can be told apart with no mistakes is key to increasing the range of measurable particle sizes.

Note: A particle’s refractive index also plays a role in how well its signal is read. The same technology can also see many metallic particles 10 nm and less. Why? Because they refract light to a greater extent than other materials. 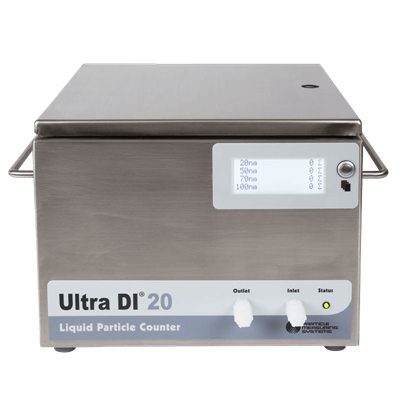 Particle Measuring Systems has been working with Intel for many years developing new technology to improve the capabilities of optical particle counters for fab implementation. Together, they collaborated on improving signal and noise readings of liquid particle counters for nanoparticle contamination in ultrapure water. The cleaner the fluid, the higher the difficulty in matching results between different counters at different stages of filtration. Their combined efforts pushed the boundaries of quality established by prior generations of particle counters for liquids.

In our next blog in this series, we will examine the filter studies performed at Intel and share how their results demonstrated the improvements made to nano-scale particle counting. You can learn more by watching this 2020 Ultrapure Micro event presentation.

Do you want more information on a 20 nm ultrapure particle counter? Particle Measuring Systems is only manufacturer only to reliably provide 20 nm particle monitoring for ultrapure water and chemicals.